The Wisdom of the Zen Masters

A young monk had been under a famous Master for but two years when the old Master died. When the successor was installed, all monks who wished to continue under him went to ask his permission. When it was young Kyogen’s turn, the new Master who knew him well asked: ” So here you are, brilliant, with outstanding capacities, knowing all the scriptures by heart! Are you sure you want and need to continue this rough and simple training?”

The young man, rather pleased that his capacities were known, indicated that he considered it a good thing to stay for a few more years. The new Master took him up: “Well, so you are pleased with yourself! You can quote the scriptures by heart – tell me then, where do you go after you have died?”

Kyogen was speechless. His immense scriptural knowledge raced through his mind, but he could not remember any relevant passage. Piqued in his pride and convinced that the answer must be in the scriptures, he asked permission to withdraw so as to look it up. But however he searched, he could not find it. The question gripped him, he was determined to find out, feeling that everything was at stake.

So he poured over the scriptures, forgot food and sleep, and within three days was worked up to such a state of tension that he could no longer bear it. Gaining an interview with the Master, he admitted that he could not find the answer in the scriptures, and could the Master please tell him.

The Master replied that it was for him to find out, for if he were told, it would rob him of his own insight. Kyogen in the urgency of his problem was beyond reasoning, and now demanded an answer. On the Master’s stern refusal, he gripped him and threatened to kill him. “And do you think my dead body will give you an answer?” laughed the Master.

At that the tension in Kyogen broke; he realized what he had done. He apologized and left the monastery, convinced that he had lost all his chances in this life. He decided to spend his days humbly and harmlessly as a wandering monk, hoping that in his next life he would thus have better circumstances in which to continue his training.

After years of wandering all over the country, he came to the tomb of the Sixth Patriarch which he found derelict and uncared for. He settled down there, restoring the place, keeping the grounds, and looking after the occasional pilgrim. Thus he lived for years.

One day, he was sweeping and weeding the grounds as usual, and as he tipped out his barrowful of weeds and pebbles in the back yard, one pebble hit a bamboo trunk with a resounding clink. On hearing that sound he suddenly “awoke” and with the awakening, the answer to his old question was also clear to him.

He cleaned himself up, dressed in his full monk’s robes, climbed the mountain behind the pagoda, and there prostrated himself in the direction of his monastery, thanking the Master that even under threat to his life he had not divulged an answer which would have robbed him of his own insight.

Excerpted from The Wisdom of the Zen Masters; translated by Irmgard Schloegl (1975)

Sometimes in our intense desire to learn, to acquire technique, to attain an enlightenment, we seem to push farther from us the very state we seek. In the above story the sense of Zen being a teaching outside words and letters, scriptures and dogma is well illustrated.

Kyogen had learned all the outer form of Zen, but in terms of deeper realization, the new Master aided him best in his quest for true understanding. The realization of Zen is not something that can be “told” to anyone, rather it is based on direct experience of the Truth. Words more often than not, obscure understanding.

As Chuang tze would say, “Show me the person who understands that words have no meaning – that's the person I want to talk to.”

Some translations of the above story end like this:

Kyogen, enlightened, bows in the direction of his deceased teacher and says, “Master, I thank you for never stating anything too clearly.”

It is a delicate balance exploring a life of training. We want to give the effort of Kyogen without becoming lost in attainments which are the smaller goals and distract us from the wu/wei we seek. 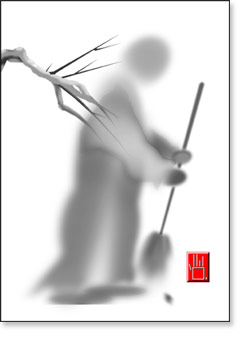