The Record of Linji – Sangha Instruction

Stream enterers! It's none other than you; in your venue of activities, right in front of you, no different from that of the buddhas who are our patriarchs. You just don't have confidence in this, and so right away proceed to external seeking.

Make no mistake! Externally there is no dharma; even the internal is ungraspable mentally. Rather than appropriating the words from my mouth, it would be better for you to give it a rest and have nothing-to-do. Thoughts that have already arisen—do not continue them. Thoughts that have not yet arisen—you must not let them get loose.

It would do you more good than ten years' traveling on foot throughout the world trying to locate a teacher in order to seek the dharma and realization. According to my vision, there's no “yadda, yadda, yadda” to it. It's just a matter of being your usual self as in your daily activities. Put on your clothes, eat your food, and pass your time—not-a-thing-to-do.

They are the furnishings that come with your house. “The three realms” won't say to you: “We are the three realms.” In any case, it's you, the stream-enterer, right now before me, clearly casting your light on all things and sizing up the world, who does the attaching of names to the three realms.

Students today fall short in their understanding because they consider names to be understanding. In great big books they transcribe the sayings of some old dead geezer, (some master without the eye), stacking them three layers deep, five layers deep, into their monk's traveling bags and not letting anyone else see them. They say, “This is the mysterious principle” and guard it as a secret treasure. Big mistake! Blind idiots! .

Just what kind of juice do you hope to extract from such dried-up bones as these words of instruction from dead geezers, recorded in your great big books?

There is a type of bad teacher who doesn't know good from bad. They conjecture and haggle over the teachings, fabricating interpretations of the phrasing. It is as if they hold clods in their mouths and spit them back out for other people. It's like commoners transmitting secret passwords and counter-passwords for identifying friend from foe—a whole life frittered away. .

Even though bad teachers say the secret password, “I have left home,” the moment they are asked about the “buddhadharma” which is not the expected counter-password, they right away clam up and have nothing whatsoever to say. Their eyes are like the blackened vent of a stove, and their silent mouths are

like a shoulder pole sagging under a heavy load. Beings like this, even if they were to encounter the next buddha Maitreya as he emerges into the world, would fall into an Avici Hell.

Venerables! You bustle along going to various regions—what are you looking for? The soles of your feet have gotten as wide as planks from tramping about traveling on foot far and wide in search of a teacher and realization. There is no “buddha” that ought to be sought; no “Way” that ought to be completed; no “dharma” that ought to be attained, nothing-to-do.

Externally seeking for a “buddha” with characteristics, a nirmanakaya buddha adorned with thirty two characteristics or a buddha made of clay or wood, would not resemble you, the true buddha of your own mind/that one person. If you want to know your original mind, the true person, it's not something outside of you that you can join up with; nor is it something you can ever be apart from.

Question: “What are the true buddha, the true dharma, and the true Way like? Please give us instruction.”

The Master said: “A 'buddha' is mind purity itself. The 'dharma' is mind-radiance itself. The 'Way' in every place is unobstructed radiance itself. The three are one, and they are all empty terms, without real existence. For the practitioner of beholding reality as it truly is, moment after moment the mind never breaks off from beholding reality as it truly is—twenty four hours a day peacefully dwelling in the state of the original portion.

When the Great Master Bodhidharma came from the western lands, he was only in search of a person, a true person who was not discombobulated by other people. Later he met the second patriarch Huike. At Bodhidharma's single utterance, 'My quieting mind for you is over' at once everything was settled, and for the first time Huike understood that his practice up until then had been useless effort.

Excerpted from The Record of Linji trans by Jeffrey Broughton 2013

These selections are taken from Sangha Instructions from ancient times and give the flavor of a master wielding a sword to cut through illusions. Sparse and to the point, Linji has no tolerance for superficial approaches and glib comments from students. He is a force of nature and takes us straight forward up the mountain.  Like a skillful teacher, the rug is pulled out from our feet anywhere we try to get a purchase.  Nothing to hold onto.

It feels like being called back home after years of wandering the meadows and byways of spiritual searching.  What more do we need?  As this mountain person would say today:

“May my mind be clear,

May I live fearlessly in the Mind of Readiness

May I rely on nothing but Emptiness”

Dedicating the fruits of our practice to all sentient beings! 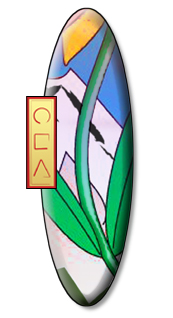