From the Record of Lin-chi

Someone asked: “What do you mean by the true Buddha, the true Dharma, and the true Way? Would you be good enough to explain to us?”

The Master said: “Buddha is the cleanness and purity of the mind. The Dharma is the shining brightness of the mind. The Way is the pure light that is never obstructed anywhere. The three are in fact one. All are empty names and have no true reality.”

“Suppose you yearn to be a sage. Sage is just a word, sage. There are some types of students who go off to Mt. Wu-t’ai looking for Manjushri. They’re wrong from the very start! Manjushri isn’t on Mt. Wu-t’ai. Would you like to get to know Manjushri? You here in front of my eyes, carrying out your activities, from first to last never changing, wherever you go never doubting; this is the living Manjushri.

“Your mind that each moment shines with the light of nondiscrimination, wherever it may be, this is the true Samantabhadra. Your mind that each moment is capable of freeing itself from its shackles, everywhere emancipated, this is the method of meditating on Kwan-yin. These three act as host and companion to one another, all three appearing at the same time when they appear, one in three, three in one. Only when you have understood all this will you be ready to read the scriptural teachings.”

“You can’t seem to stop your mind from racing around everywhere seeking something. That’s why the Ancestor said, ‘Hopeless fellows using their head to look for their heads!’ You must right now turn your light around and shine it on yourselves, not go seeking somewhere else. Then you will understand that in body and mind you are no different from the Ancestors and buddhas, and that there is nothing to do. Do that and you may speak of ‘getting the Dharma.’

“In my view, there are, in fact, no great number of principles to be grasped. If you want to use the thing, then use it. If you don’t want to use it, then let it be.

“People here and there talk about the six rules and the ten thousand practices, supposing that these constitute the Dharma of the buddhas. But I say that these are just adornments of the sect, the trappings of Buddhism. They are

not the Dharma of the buddhas. You may observe the fasts and observe the precepts, or carry a dish of oil without spilling, but if your Dharma-eye is not wide open, then all you’re doing is running up a big debt.

“As for those who go off to live all alone on a solitary peak, eating only one meal a day at the hour of dawn, sitting in meditation for long periods without lying down, performing circumambulations six times a day; such persons are all just creating karma. Then there are those who cast away their head and eyes, marrow and brains, their domains and cities, family, horses, the seven precious things, throwing them all away. People who think in that way are all inflicting pain on their body and mind, and in consequence will invite some kind of painful retribution. Better to do nothing, to be simple, direct, with nothing mixed in.

“Followers of the Way, don’t take the Buddha to be some sort of ultimate goal. Bodhisattvas and arhats are like chains for fettering people.

Followers of the Way, there is no Buddha to be gained, and the Three Vehicles, the five natures, the teaching of the perfect and immediate enlightenment are all simply medicines to cure diseases of the moment. None have any true reality. Even if they had, they would still all be mere shams, placards proclaiming superficial matters, so many words lined up, pronouncments of such kind.

“Followers of the Way, even if you can understand a hundred sutras and treatises, you’re not as good as one plain monk who does nothing. As soon as you acquire a little of such understanding, you start treating others with scorn and contempt, vying and struggling with them like so many asuras, blinded by ignorance of self and others, forever creating karma.

When you get hungry, eat your rice;

When you get sleepy, close your eyes.

Fools may laugh at me,

But wise people will know what I mean.

“Followers of the Way, don’t search for anything in written words. The exertions of your mind will tire it out; you’ll gulp cold air and gain nothing. Better to realize that at every moment  all is conditioned and without true birth, to go beyond the bodhisattvas of the Three Vehicle provisional doctrines.

“Don’t dawdle your days away! In the past, before I had come to see things right, there was nothing but blackness all around me. But I knew that I shouldn’t let the time slip by in vain, and so, belly all afire, mind in a rush, I raced all over in search of the Way. Later I was able to get help from others, so that finally I could do as I’m doing today, talking with you followers of the Way. As followers of the Way, let me urge you not to do what you are doing just for the sake of appearances. See how quickly the world goes by! A good friend and teacher is hard to find, as rarely met with as the udumbara f lower.

“If you want to be always in accord with the Dharma, never give in to doubt. ‘Spread it out and it fills the whole Dharma-realm; gather it up, and it’s tinier than a thread of hair.’ Its lone brightness gleaming forth, it has never lacked anything. ‘The eye doesn’t see it; the ear doesn’t hear it.’

“What shall we call this thing? A man of old said, ‘Say something about a thing, and you’re already off the mark.’ You’ll just have to see it for yourselves. What other way is there?”

So much of life and teaching seems to be “neti, neti” (not this, not that).  Our tendency seems to be to latch onto answers or a practice in order to put the mind to rest. But any resolution we come to in words or concepts can only be a partial view. How we wish we could hang around to enjoy a sense of enlightenment. But who is it that is around to enjoy it? Any sense of separation is just that.

The working of the mind seems similar to being on a runaway horse at times. Restlessly moving from one emotion, idea, or construct to another.  Meditation is like reining the horse in, drawing the awareness back inside. And with practice the Return happens more and more gracefully.

“All questions are reducible to one: 'Who am I?' This question is the Quest for the Self, by which the egoless state is won. In that State there is only the One and nothing else, and hence there are no questions or answers, but only Silence.” 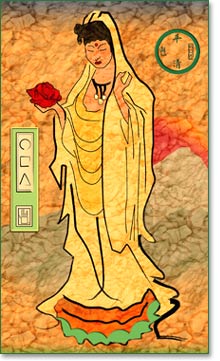