If someone is determined to reach enlightenment, what is the most essential method he can practice?

The most essential method, which includes all other methods, is beholding the mind.

But how can one method include all others?

But how can beholding the mind be called understanding?

When a great bodhisattva delves deeply into perfect wisdom, he realizes that the four elements and five shades are devoid of a personal self.   And he realizes that the activity of the mind has two aspects: pure and impure.  By their very nature, these two mental states are always present.  They alternate as cause or effect depending on conditions, the pure mind delighting in good deeds; the impure mind thinking of evil. Those who aren’t affected by impurity are sages.  They transcend suffering and experience the bliss of nirvana.  All others, trapped by the impure mind and entangled by their own karma, are mortals.  They drift through the three realms and suffer countless afflictions, and all because their impure mind obscures their real self.

The Sutra of the Ten Stages says, “In the body of mortals is the indestructible buddha-nature.  Like the sun, its light fills endless space. But once veiled by the dark clouds of the five shades, it’s like light inside a jar, hidden from view.”  And the Nirvana Sutra says, “All mortals have the buddha-nature. But it’s covered by darkness from which they can’t escape.  Our buddha-nature is awareness:  to be aware and to make others aware.  To realize awareness is liberation.”  Everything good has awareness for its root.  From this root of awareness grows the tree of all virtues and the fruit of nirvana.  Beholding the mind like this is understanding.

You say that our true buddha-nature and all virtues have awareness for their root. But what is the root of ignorance?

The ignorant mind, with its infinite afflictions, passions and evils, is rooted in the three poisons:  greed, anger, and delusion.  These three poisoned states of mind themselves include countless evils, like trees that have a single trunk but countless branches and leaves.  Yet each poison produces so many more millions of evils that the example of a tree is hardly fitting for comparison.

The three poisons are present in our six sense organs as six kinds of consciousness, or thieves.  They’re called thieves because they pass in and out of the gates of the senses, covet limitless possessions, engage in evil and mask their true identity.  And because mortals are misled in body and mind by these poisons or thieves, they become lost in life and death, wander through the six states of existence and suffer countless afflictions.  These afflictions are like rivers that surge for a thousand miles due to the constant flow of small springs. But if someone cuts off their source, rivers dry up.  And if someone who seeks liberation can turn the three poisons into the three sets of precepts and the six thieves into the six paramitas, he rids himself of affliction once and for all.

But the three realms and six senses of existence are infinitely vast.  How can we escape their endless afflictions if all we do is behold the mind?

But the great bodhisattvas have only achieved enlightenment by observing the three sets of precepts and by practicing the six paramitas.  Now you tell disciples merely to behold the mind.  How can anyone reach enlightenment without cultivating rules of discipline?

The three sets of precepts are for overcoming the three poisoned states of mind.  When you overcome these poisons, you create three sets of limitless virtue.  A set gathers things together—in this case, countless good thoughts throughout your mind.  And the six paramitas are for purifying the six senses.  What we call paramitas, you call means to the other shore. By purifying your six senses of the dust of sensation, the paramitas ferry you across the River of Affliction to the Shore of Enlightenment.

The sutras say that someone who whole-heartedly invokes the Buddha is sure to be reborn in the Western Paradise.  Since this door leads to Buddhahood, why seek liberation in beholding the mind?

If you’re going to invoke the Buddha, you have to do it right.  Unless you understand what invoking means, you’ll do it wrong. And if you do it wrong, you’ll never go anywhere.  Buddha means awareness, the awareness of body and mind that prevents evil from arising in either.  And to invoke means to call to mind, to call constantly to mind the rules of discipline and to follow them with all your might.  This is what’s meant by invoking.  Invoking has to do with thought and not with language.  If you use a trap to catch fish, once you succeed, you can forget the trap.  And if you use language to find meaning, once you find it, you can forget language.

To invoke the Buddha’s name, you have to understand the dharma of invoking. If it’s not present in your mind, you mouth chants an empty name.  As long as you’re troubled by the three poisons or by thoughts of yourself, your deluded mind will keep you from seeing the Buddha, and you’ll only waste your effort.

Chanting and invoking are worlds apart.  Chanting is done with the mouth.  Invoking is done with the mind. And because invoking comes from the mind, it’s called the door to awareness.  Chanting is centered in the mouth and appears as sound.  If you cling to appearances while searching for meaning, you won’t find a thing.  Thus, sages of the past cultivated introspection and not speech.

The people I meet nowadays are superficial.  They think of merit as something that has form.  They foolishly concern themselves with erecting statues and stupas, telling people to pile up limber and bricks, to pain this blue or that green.  They strain body and mind, injure themselves and mislead others. And they don’t know enough to be ashamed.  How will they ever become enlightened?  They see something tangible and instantly become attached.  If you talk to them about formlessness, they sit there dumb and confused.  Greedy for the small mercies of this world, they remain blind to the great suffering to come.  Such disciples wear themselves out in vain.  Turning from the true to the false, they talk about nothing but future blessings.

If you can simply concentrate your mind’s inner light and behold its outer illumination, you’ll dispel the three poisons and drive away the six thieves once and for a ll. And without effort you’ll gain possession of an infinite number of virtues, perfections and doors to the truth.  Seeing through the mundane and witnessing the sublime is less than an eye-blink away.  Realization is now.  Why worry about gray hair?  But the true door is hidden and can’t be revealed.  I have only touched upon beholding the mind.

Bodhidharma’s teaching is essentially very sparse and simple… “behold the mind.”  Doesn’t allow a lot of distracting philosophical points, just brings us back to awareness and turning the attention inwards.  Here we have some pointed questions on various practices in different schools of Buddhism and Bodhidharma’s replies.

There are many teachings and paths in Buddhism; Bodhidharma’s Zen is not for everyone.   It is like the straight path up the mountain rather than the rambling circuitous route.  However, ultimately, they all get us to the same place.  Some allow for more distractions, but if we have a tolerance for that, those too will fade over time.

In honor of Bodhidharma, the wall gazer, said to have sat in a cave for 9 years facing a wall, may we embrace a steadfastness in our own practice that no worldly distractions can shake. 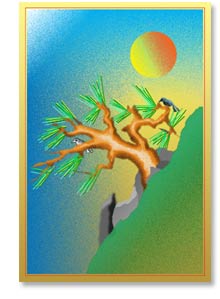